Home > Our Services > U Think?

U Think? is a program for Heterosexual African American men and women, Men who have sex with men over the age of eighteen who are at risk of contracting HIV, as well as persons currently living with HIV.

U THINK has six components to it: Condom Distribution, One on One sessions, and Community event sessions, RESPECT, VOICES/VOCES and Partnership for Health. 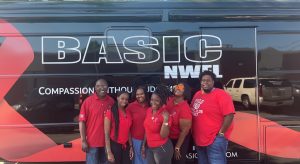 We will offer another program for high risk individuals called VOICES (Video Opportunities for Innovative Condom Education and Safer Sex). A video is watched and a discussion is held on safer sex options that specifically target the effective use of condoms. U THINK? was also funded to do condom distribution to individuals as well as to barber shops, hairdressers and various other businesses. U THINK? has an intervention for Positive individuals called Partnership for Health which deals with making positive choices.

The Prevention team is available to do community events as well as having those important one on one conversation with people from the six counties we serve.